Which sample of matter represents a mixture?

Which sample of matter is classified as a substance?

(1) the same density and the same chemical properties

(3) a different density and the same chemical properties

Which two particle diagrams each represent a sample of one substance? 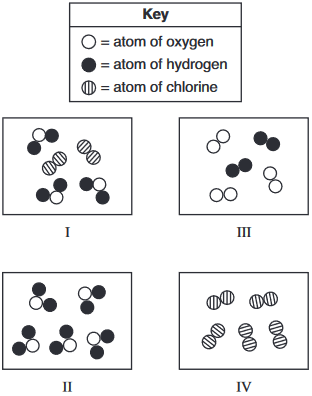 Given the particle diagram:

Which type of matter is represented by the particle diagram? 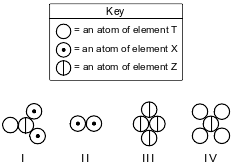 Which two models can be classified as elements?

A substance is classified as either an element or a

At STP, which physical property of aluminum always remains the same from sample to sample?

Which substance can not be broken down by chemical means?

Base your answers to questions 12 on the information below.

The amount of carbon dioxide in the atmosphere can vary. Data for the concentration of CO2(g) from 1960 to 2000 are shown in the table below.

Explain why the atmosphere is classified as a mixture.

• The gases in a mixture can be separated by physical means.

• The gases in the atmosphere are separate elements or compounds that are not chemically combined with each other.

• The proportions of the gases in the atmosphere can vary.

• more than one substance

In the late 19th century, the Hall-Herroult process was invented as an inexpensive way to produce aluminum. In this process, Al2O3(ℓ) extracted from bauxite is dissolved in Na3AlF6(ℓ) in a graphite-lined tank, as shown in the diagram below. The products are carbon dioxide and molten aluminum metal.

• Both samples have the same chemical properties.

Base your answers to questions 14 on the information below.

John Dalton, an early scientist, sketched the structure of compounds using his own symbols for the elements known at the time. Dalton’s symbols for four elements and his drawing of potassium aluminum sulfate are represented by the diagram below. 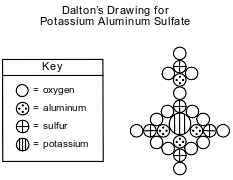 Today, it is known that the chemical formula for potassium aluminum sulfate is KAl(SO4)2•12H2O. It is a hydrated compound because water molecules are included within its crystal structure. There are 12 moles of H2O for every 1 mole of KAl(SO4)2. The compound contains two different positive ions. The gram-formula mass of KAl(SO4)2•12H2O is 474 grams per mole.

Describe, in terms of composition, one way in which Dalton’s perception of potassium aluminum sulfate differs from what is known today about the compound.

• Dalton’s drawing did not include the element hydrogen.

• It did not include water.

Base your answers to questions 15 on the information below.

Iron has been used for thousands of years. In the air, iron corrodes. One reaction for the corrosion of iron is represented by the balanced equation below.

In the presence of water, iron corrodes more quickly. This corrosion is represented by the unbalanced equation below.

Identify one substance in the passage that can not be broken down by a chemical change.