What is the chemical formula for sodium oxalate?

What is the chemical name of the compound NH4SCN?

Which statement explains why NaBr is classifi ed as a compound?

(1) Na and Br are chemically combined in a fixed proportion.

What is the formula for iron(II) oxide?

Which substance can be broken down by chemical means?

What is represented by the chemical formula PbCl2(s)?

What is the chemical formula for ammonium sulfide?

What is the chemical formula of titanium(II) oxide?

What is the chemical formula for sodium sulfate?

(1) physically mixed in a fixed proportion

(2) physically mixed in a variable proportion

(3) chemically combined in a fixed proportion

(4) chemically combined in a variable proportion

Base your answers to questions 12 on the information below and on your knowledge of chemistry.

During a laboratory activity, appropriate safety equipment was used and safety procedures were followed. A laboratory technician heated a sample of solid KClO3 in a crucible to determine the percent composition by mass of oxygen in the compound. The unbalanced equation and the data for the decomposition of solid KClO3 are shown below. 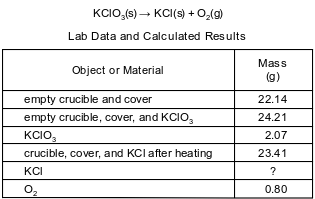 Write a chemical name for the compound that decomposed.

Thermal energy is absorbed as chemical reactions occur during the process of baking muffins. The batter for muffins often contains baking soda, NaHCO3(s), which decomposes as the muffins are baked in an oven at 200.°C. The balanced equation below represents this reaction, which releases CO2(g) and causes the muffins to rise as they bake. The H2O(ℓ) is released into the air of the oven as it becomes a vapor.

Based on Table E, identify the polyatomic ion in the solid product of the reaction.

Base your answers to questions 14 on the information below and on your knowledge of chemistry.

A sample of seawater is analyzed. The table below gives the concentration of some ions in the sample. 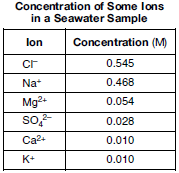 Write a chemical formula of one compound formed by the combination of K+ ions with one of these ions as water completely evaporates from the seawater sample.

Base your answers to questions 15 on the information below and on your knowledge of chemistry.

Baking soda, NaHCO3, can be commercially produced during a series of chemical reactions called the Solvay process. In this process, NH3(aq), NaCl(aq), and other chemicals are used to produce NaHCO3(s) and NH4Cl(aq).