Chemistry worksheet
Topic: Separation Of The Components Of A Mixture

Separation Of The Components Of A Mixture 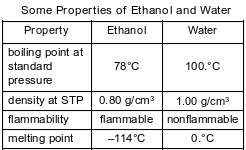 Which statement describes a property of ethanol after being separated from the mixture?

(4) Ethanol has a boiling point of 89°C at standard pressure.

In a laboratory investigation, a student separates colored compounds obtained from a mixture of crushed spinach leaves and water by using paper chromatography. The colored compounds separate because of differences in

Given the formulas representing two compounds at standard pressure:

The compounds can be differentiated by their

(4) percent compositions by mass of carbon

Differences in which property allow the separation of a sample of sand and seawater by filtration?

The graph below shows the volume and the mass of four different substances at STP. 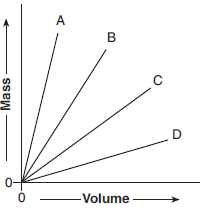 Which of the four substances has the lowest density?

Base your answers to questions 10 on the information below and on your knowledge of chemistry.

During a laboratory activity, appropriate safety equipment is used and safety procedures are followed. A student separates a sample of rock salt that has two components; NaCl(s) and small insoluble rock particles. First, the student thoroughly stirs the sample of rock salt into a sample of water in a fl ask. The mixture in the fl ask is fi ltered using the lab apparatus shown below. 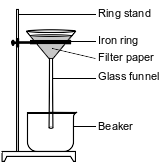 The water is evaporated from the beaker. The fi lter paper and its contents are dried. The data collected by the student are shown in the table below. 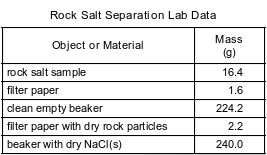 Explain, in terms of particle size, why the rock particles are trapped by the fi lter paper.

• The particles of the rock are much larger than the openings in the filter paper.

• The rock particles are too big to pass through the paper.

Base your answers to questions 11 on the information below and on your knowledge of chemistry.

A hydrate is a compound that has water molecules within its crystal structure. Magnesium sulfate heptahydrate, MgSO4•7H2O, is a hydrated form of magnesium sulfate. The hydrated compound has 7 moles of H2O for each mole of MgSO4. When 5.06 grams of MgSO4•7H2O are heated to at least 300.°C in a crucible by using a laboratory burner, the water molecules are released. The sample was heated repeatedly, until the remaining MgSO4 had a constant mass of 2.47 grams. During this laboratory activity, appropriate safety equipment was used and safety procedures were followed.

Explain why the sample in the crucible was heated repeatedly until the sample had a constant mass.

• Repeated heatings ensure that all of the water in the sample has been removed.

• It is necessary to drive out all of the water from the hydrate.

• to make sure all the H2O is gone

Base your answers to questions 12 on the information below and on your knowledge of chemistry.

Crude oil, primarily a mixture of hydrocarbons, is separated into useful components in a fractionating tower. At the bottom of the tower, the crude oil is heated to about 400°C. The gases formed rise and cool. Most of the gases condense and are collected as liquid fractions. The table below shows the temperature ranges for collecting various hydrocarbon fractions.

State the temperature range for the fraction collected that contains octane molecules.

In a laboratory investigation, a student is given a sample that is a mixture of 3.0 grams of NaCl(s) and 4.0 grams of sand, which is mostly SiO2(s). The purpose of the investigation is to separate and recover the compounds in the sample. In the first step, the student places the sample in a 250-mL flask. Then, 50. grams of distilled water are added to the flask, and the contents are thoroughly stirred. The mixture in the flask is then filtered, using the equipment represented by the diagram below. 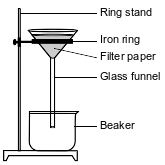 Describe a procedure to remove the water from the mixture that passes through the filter and collects in the beaker.

• Allow the water to evaporate.

• Heat the mixture until all of the water vaporizes.

• Boil off the water.

Identify a laboratory process that can be used to separate a liquid mixture of methanol and water, based on the differences in their boiling points.

State the physical property that makes it possible to separate a solution by distillation.